The original DT Film Scanning Kit revolutionized the way film is digitized by enhancing capture speed without the use oftraditional drum scanners and increasing image quality while utilizing high resolution digital camera backs. As with any system, there is always room for improvement and we have been listening to industry feedback to advance the capabilities of our film scanning solutions. Meet the new DT Film Positioning System – the next generation in film scanning technologies. 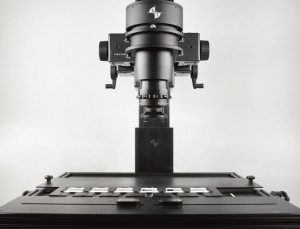 Designed to be a complete system or as stand-alone components, the DT Film Positioning System is compatible with our first generation film carriers as well as the new Basic and Advanced Carriers, which can be purchased separately and used interchangeably depending on project needs. The most considerable innovation in this solution is the optional Film Positioning Stage that is placed over the transilluminator. This stage elevates the film being digitized away from the lightbox so that the film is not exposed to any heat and allows easy LCC generation. The stage also creates a rock solid platform for the rapid capture of film by precisely controlling its position, so that every frame will be captured at a repeatable location. The new DT Film Positioning System was developed to achieve greater system utilization and throughput while providing preservation quality digitization.

Both Basic & Advanced Carriers enable rapid and precise positioning with conservation-grade contact-free handling – the film is only touched outside of the image area. The Advanced Carriers allow the operator to manually apply gentle tensioning to the film to ensure flatness, and include a set of detents that provide an easy mechanical stop to ensure operator speed and accuracy with a consistent registration distance under 1mm. Both the Basic Carriers and Advanced Carriers are easy to load, and provide excellent positional stability. Basic Carriers are designed as a cost effective means for projects where multiple operators are loading film and more than one film carrier of the same size are needed.

Note: System requires DT RCam and Reprographic Bench like the RG3040 or RGC180.